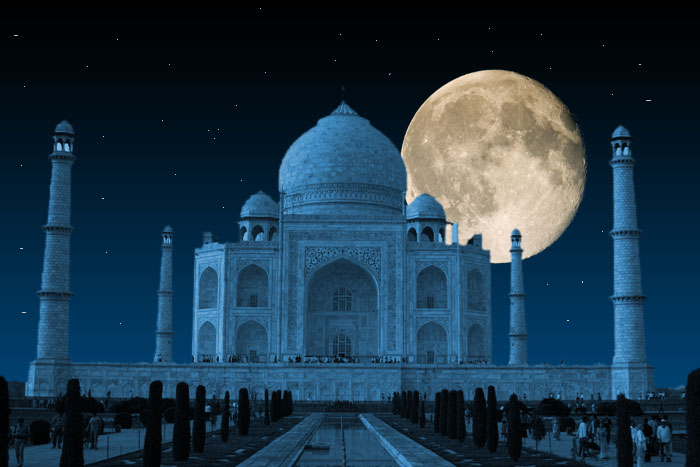 Visit Taj Mahal – Taj Mahal One of the seven wonders of the world Taj Mahal was built by a grief stricken Emperor Shahjahan as a memorial to his beloved wife Mumtaz Mahal. A world-renowned wonder, Taj Mahal sits pretty on the northern side of this green paradise. It looks the same from all the four sides! The Quranic inscriptions on its four entrances are carved in such subtle increase in size that may appear to be of the same size from top to bottom! Shahjahan invited master craftsmen from as far as Italy and Persia to help design his ambitious tribute to love. Taj Mahal is phenomenal not in the beauty alone that shines forth, but in the deep planning and design that went into its making, and the ethereal idea of immortalizing love. Delicate carvings in marble vie with gorgeous pietra dura for attention. Lapis-lazuli, Cornelian, Mother of pearl, Agate and Emerald are inlayed in floral and geometrical patterns in the marble itself. This enchanting mausoleum, on the bank of river Yamuna started in 1631 and it took 22 years to complete with the help of an estimated 20000 workers. More Information on Wiki Page on Taj Mahal and the official Government website on Taj Mahal

Visit Agra Fort – The great Mughal Emperor Akbar commissioned the construction of the Agra Fort in 1666, A.D. although additions were made till the time of his grandson Shahjahan. The forbidding exteriors of this fort hide an inner paradise. There are a number of exquisite buildings like Moti Masjid – a white marble mosque akin to a perfect pearl; Diwan-I-Am, Diwan-I-Khaas, Musamman Burj – where Shahjahan died in 1666 A.D. Jahangir’s Palace; Khaas Mahal and Shish Mahal.

Visit Itmad-ud-daula(Baby Taj) – Itmad-ud-daula has a special place in the chronicles of both history as well as architecture. This is precisely because Itmad ud Daula is the very first tomb in India that is entirely made out of Marble. This is actually a mausoleum that overlooks the River Yamuna and is a tomb of Mir Ghiyas Beg, a minister in the court of Shah Jahan.

Visit Akbar’s Tomb at Sikandra – One of famous mugal Era building in Agra and most visit tourist place of Agra. Sikandra fort is also known as mausoleum of Akbar. Fort of sikandra has blending of Islamic, Jain, Hindu and Christian theme. Fort of Sikandra is named after ruler of Delhi Sikandar lodhi, which was the ruler of Delhi in the year 1488 to 1517. Fort of Sikandra was built by Akbar. After death of Akbar it is continued by Jahangir son of Akbar. This fort is located about at a distance of 10 kms from the city centre.

Visit Fatehpur Sikri – the deserted red Sandstone City, Emperor Akbar built that as his capital and palace in the late 16th century is an exhilarating experience. It a veritable fairytale city and its “ruins” are in pristine condition … it’s not hard to imagine what the court life must have been like in the days of it’s grandeur. After Proceed back to Delhi – Finally you will proceed back to Delhi along with an impression of Taj Mahal and a sheer magic that the Taj exudes making it an unforgettable and cherished image forever.
On arrival you will be dropped on your Choice Destination in New Delhi/Old Delhi/Noida/Faridabad hotel or airport for your onward journey.